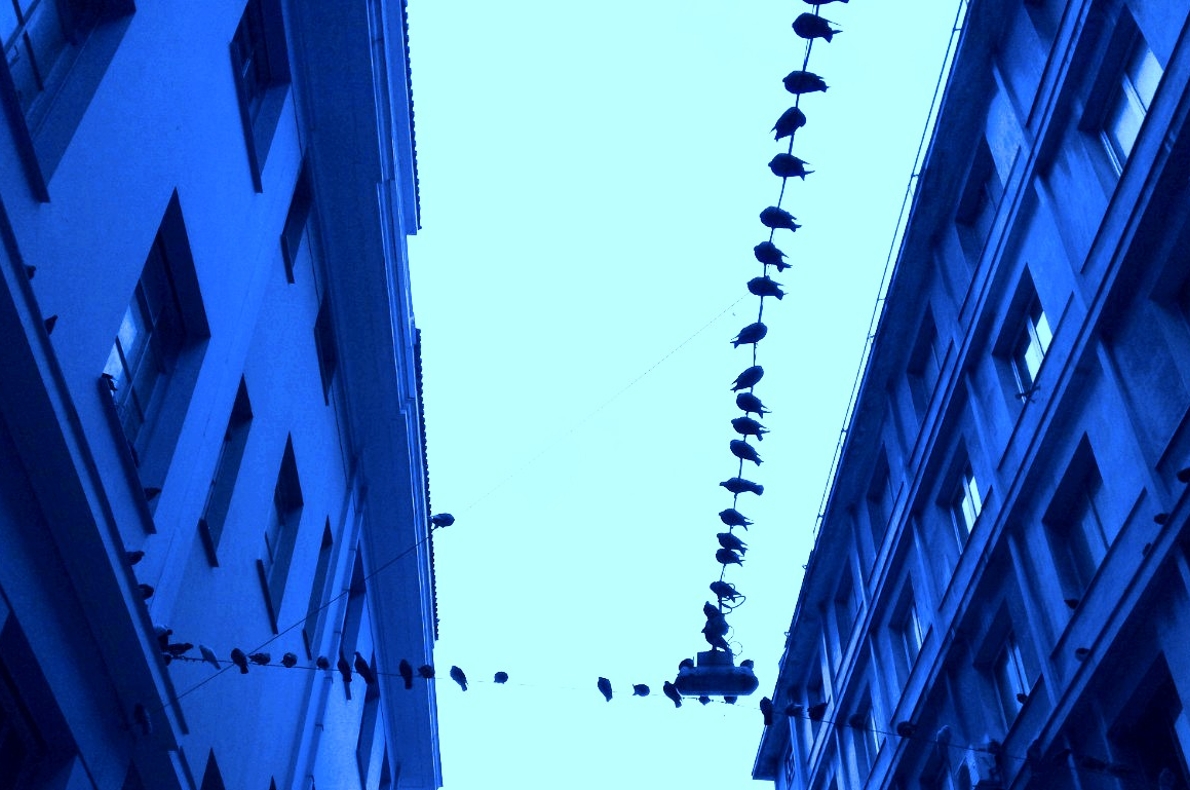 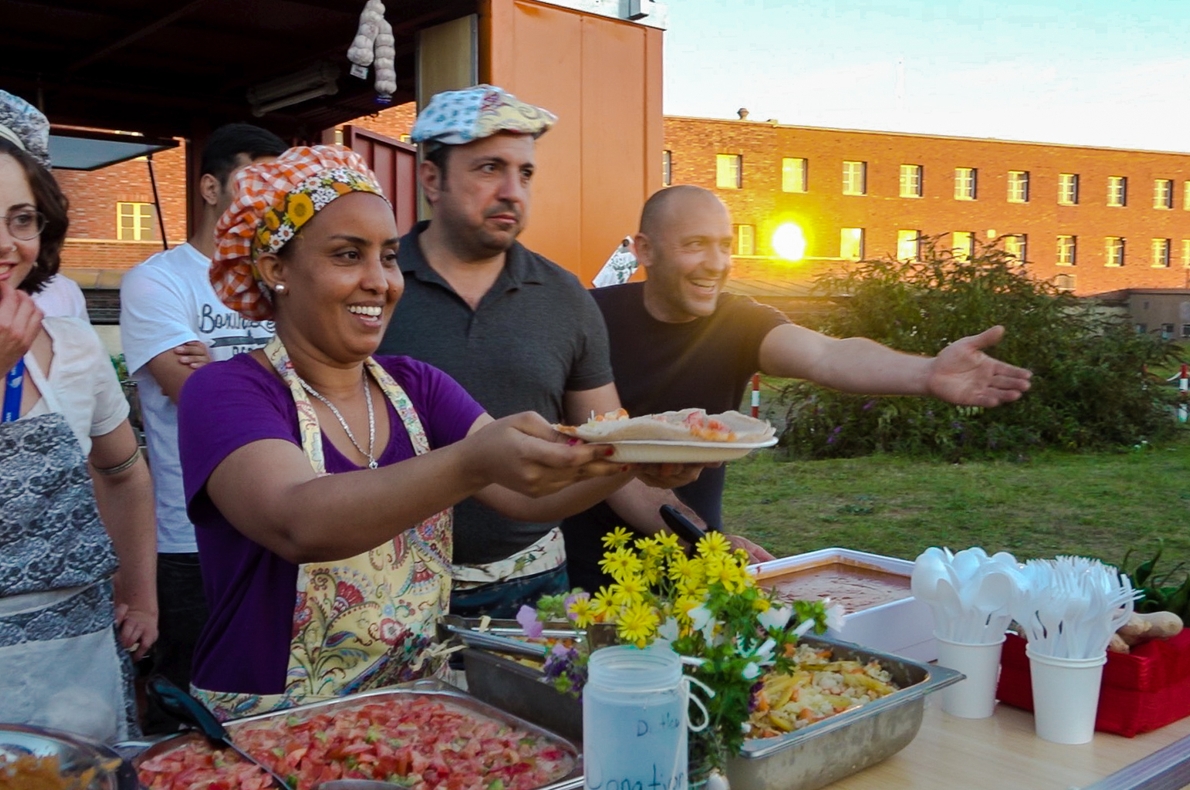 Metropolitan cities in Europe face an increasing population density and changing demographic structures in processes of gentrification. Housing is getting less and less affordable, creative, communal, and experimental movements lose their spaces while expensive hotels and luxury apartments are flourishing instead. In Athens, it becomes harder and harder for Athenians to find an apartment, as the housing space is transformed into mostly airbnb rentals and short-term leases. Big real estate companies define urban space according to their interests and suffocate communal initiatives. The housing and living situation for refugees is often terrible.

How can we create our city together? On the Athens-Berlin axis, we want to exchange experiences and take fate in our own hands. The documentary films "Rent Rebels" and "The opposite of the Grey", filmed by independent director Matthias Coers, present the self-organized actions by citizens in Berlin and other cities. We invited Matthias Coers to Athens for documentary screenings, exchange, and open discussion, along with theoreticians, researchers, architects, and artists who present their research on the subject.

7.00pm "Music from the Gerani neighborhood": Music event based on the playlist of favorite music pieces of the residents of the theater square area in the international neighborhood of Psyrri. The list is a work by Yannis Nikolaou and Hariklia Haris and a production of SOMA (Scattered Open Museum of Attica). Come join us for a glass of wine and dance

6.00pm “And the Hearts come from China” (2014) A documentary by Maria Damakidi, Eleni Tzirtzilaki, based on the local craftsmen in Psyrri and their stories.  A discussion follows.

7.00pm Documentary screening “The Opposite of Gray”
A discussion follows with the film director and activist Matthias Coers and his collaborator Grischa Dallmer

Nikos Anastassopoulos is Assistant Professor at the Polytechnic. His work addresses issues of sustainability, spatial expressions of common, architectural and social structures, alternative communities, future alternatives, systems, complexity and participation. His critical research, "Fantasy Alternative Future Prospects for Ports in Transition," which brings together a team of researchers and activists worldwide, was part of the official Habitat III program.

Pegy Zali  studied Architecture at the National Technical University of Athens and teaches at the Metropolitan University and the Whitechapel Gallery of London. She is a member of the artistic group KERNEL, of the research collective Laboratory of Urban Commons and part of the artist duo DEPZ. She has presented her work in solo and group shows at Union Pacific, SPACE, CASK gallery, The New Museum NY, the Benaki Museum, the National Museum of Contemporary Art, Centre For Contemporary Art Futura in Prague, Ontario College of Art & Design University, among others. She has curated exhibitions and events for the Athens Biennial, CASS gallery and Woodmill in London. She has presented her work and research at the ICA London, KAM Workshop, National Hellenic Research Foundation and the Contemporary Art Centre of Thessaloniki.

Xenia Kalpaktsoglou worked as director of the Center for Contemporary Art of the DESTE Foundation in Athens. She curated solo and group exhibitions of upcoming Greek artists and has written texts for exhibition catalogues. She was a founding member and curator of the Athens Biennial of Contemporary Art together with Augustine Zenakos and PokaYio.  She is a founding member of the Civil Society Laboratory.

Ilias Marmaras is a media artist born in Athens. He studied plastic arts, urbanism and philosophy at the University Paris VIII. He is a co-founder of the New Media Arts collective. He writes articles regarding Media arts and activism for newspapers and magazines, and he directs projects mostly concerned with game art and political criticism. He also makes documentary films regarding the Communities of Commons.

Eleni Tzirtzilaki studied at the Florence Architecture School and the International Centre for the Study of the Preservation and Restoration of Cultural Heritage (ICCROM) in Rome. She undertook a research program in collaboration with Nikos Kazeros entitled “Piraeus: the abandoned zones and their transformation” within the Architecture Faculty of Athens Polytechnic where she attended the post-graduate programme in the “Architecture, Spatial Design” department, writing her dissertation on “Experiences of nomadism: urban nomads dis-placed and habitation.” She was part of the group that took first prize in the architecture competition for the remodelling of Monastiraki Square. She is part of the Urban Void group which stages actions around Athens, and the “Nomadic Architecture” group, an open workshop that searches for modes of interaction in areas in crisis. She has set up the “FOS” workshop, which stages annual seminars/workshops addressing Landscape, Settlement, Action and Space.

Penny Travlou is a Lecturer in Cultural Geography and Theory (School of Architecture and Landscape Architecture) at the University of Edinburgh. Her research work focuses on the politics of public space, social justice, common, cooperative practices, cultural landscapes and ethnography. She has participated in international research projects funded by the European Union and the UK Research Council. Since 2011, shee has been conducting ethnographic research on collaborative practices in emerging networks (eg digital art creators, cooperative economy initiatives, displaced migrants and refugees). Her latest research concerns cultural communities in Colombia. Along with her academic career, Penny Traylou is an activist on issues of common city and spatial justice.

Matthias Coers works as an independent filmmaker and sociologist. He cooperates with participative initiatives, organizes lectures and series of events focusing on urban development, social infrastructure and commemorative culture. Since the premiere of the documentary „RENT REBELS – Resistance against the sell-out of the city“ in spring 2014, he has held over 200 lectures and film events in over eighty cities worldwide at the invitation of scientific conferences, political organisations, the Goethe-Institut, citizens and experts. Coers is working for the European Media Art Festival and was member of the Berlinale Peace Film Award jury 2016 and 2018.

The project is realized in the framework of the ΠΟΛΗ2 This is Athens of the Athens Municipality.

The problems on the German and Berlin housing market are not known to many – but the past few years, the German capital Berlin has changed drastically. Apartment buildings are sold to large investors, used as investment objects, massive rent increases force tenants out of their homes. Large protests are the reaction to the increasing shortage of affordable housing.This documentary is a kaleidoscope of the tenants’ fight in Berlin against their displacement out of their neighborhood communities. Ranging from the occupation of the Berlin town hall to a camp at Kottbusser Tor, the organized prevention of evictions and the battle of senior citizens for their community center and age-appropriate apartments show social issues in Germany.

The documentary encourages city inhabitants not to surrender to feeling powerless, but to take self-empowered steps in the shaping of their city and its neighborhoods, and inspires ways in which this can be done. The film director and activist Matthias Coers will be present for discussion and exchange with the audience.Next to more than 300 screenings in Berlin institutions and cinemas, “Rent rebels” has been presented to international audience at the Urban Ethnography Lab of Humboldt University Berlin, Harvard University and University of Toronto, Goethe Institutes in Moscow and Warsaw, Hebrew University Jerusalem, House of World Cultures Berlin, Krytyka Polityczna Poland, School of Fine Arts Braunschweig, at 7 international film festivals, and many more. “Rent rebels” has been subtitled in 9 languages.

THE OPPOSITE OF GRAY | DAS GEGENTEIL VON GRAU A documentary by Matthias Coers and Right to the City Ruhr
D 2017 | 90 min. | German / English subtitles |

From housing struggles to solidarity agriculture and Refugees' Kitchen. Vacant houses, unused public space, anonymity, social stagnation – not everyone between the German cities Dortmund and Duisburg is willing to accept this. An increasing number of people are discovering possibilities to intervene in everyday urban life. A living room in the middle of the street, community gardens. Independently-run social centres, repair cafés and tenants‘ initiatives arise from the niches in the cities in a collective effort to bring meaning back to public space that is shared and beneficial to its users.Das Gegenteil von Grau / The Opposite of Gray shows different groups living practical utopias and fighting for a solidary and ecological coexistence in urban space. So far, the documentary was screened 120 times in Germany, Netherlands, Greece, Kosovo, Switzerland, Austria.

THE HEARTS COME FROM CHINA "(2014), A film by Maria Damakidi and Eleni Tzirtzilakis

Mapping the changes in the geography of the Psyrri district in Athens, the film by Maria Damakidi and Eleni Tzirtzilakis is a valuable visual record of a neighborhood in a process of gentrification, with interviews by residents and professionals in the area: "With the work force of two people and a minimum of equipment, we started to discover the "skin of the city" and the secrets of Psiri's neighborhood: Wandering through bricks, asphalt, sidewalks, abandoned buildings, the squat at Embros Theater, the terraces, the construction sites, the immigrants with the trolleys carrying the remnants of the rubbish of drug users on the sidewalks We wander around the narrow streets and squares of the neighborhood where the public space has been occupied mostly by tables and chairs, where we find all sorts of people in their daily routine."