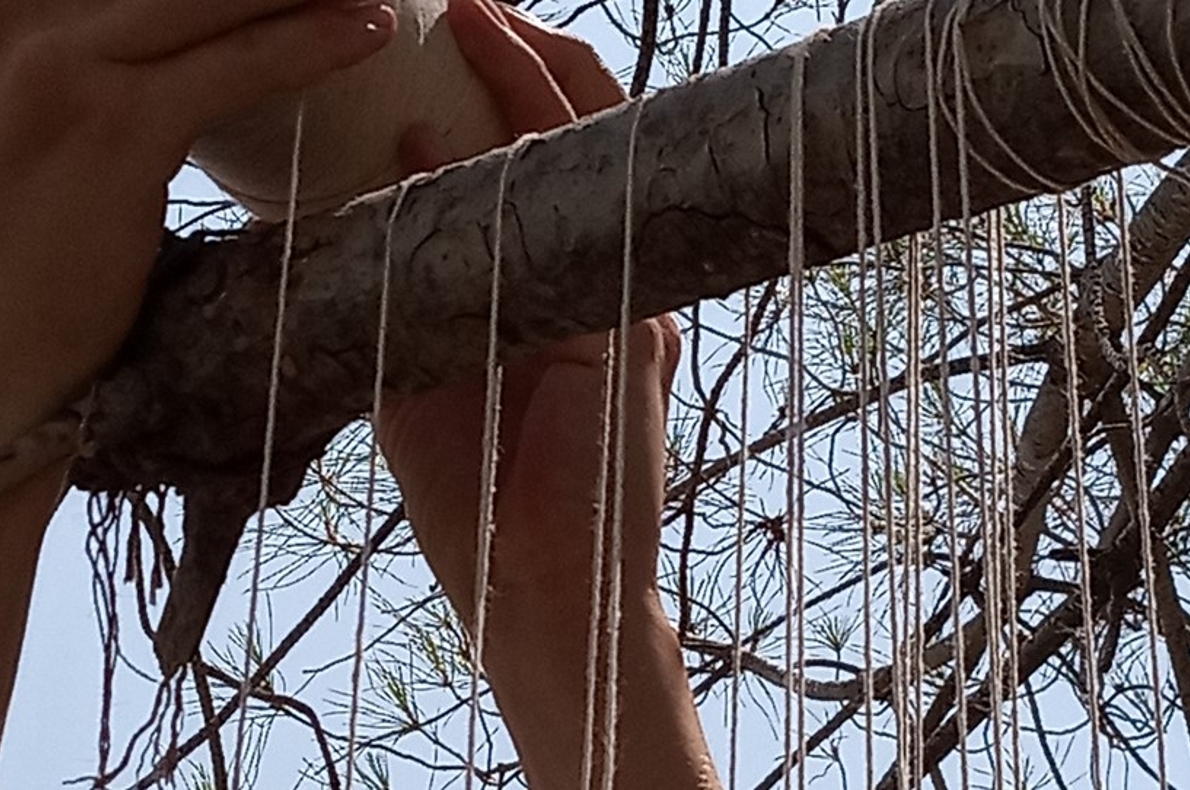 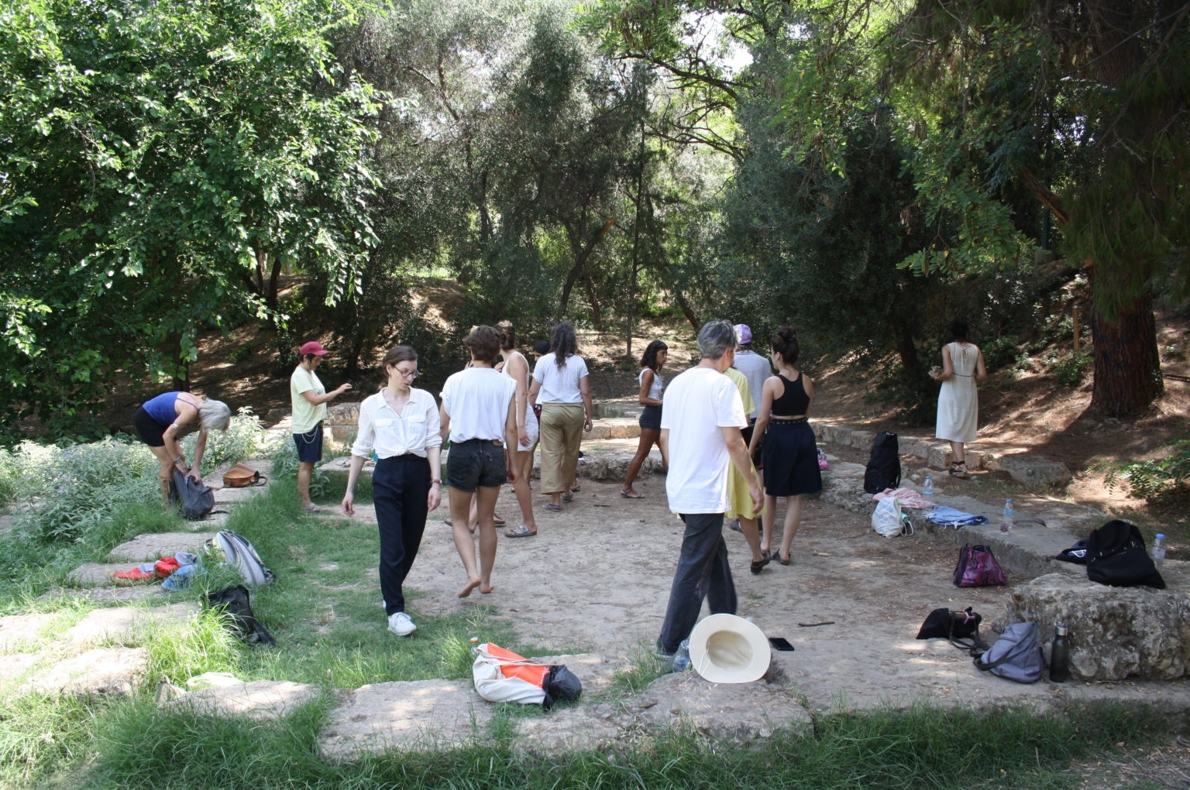 On 25-30 June, selected international artists participate onsite and online in a series of workshops on Ecofeminism. The series of ecofeminist workshops was developed as an educational experiment and takes place in an artistic environment Transindigenous Assembly by Joulia Strauss (artist, initiator and organiser of Avtonomi Akadimia), curated by Katja Ehrhardt (director of AthenSYN, curator) and Joulia Strauss. Happening in one of the most dynamic centers of our rapidly changing world, the ecofeminism workshop invited participants to collaborate in defining and enacting a new role of art. The participants have the chance to learn from and create together with experts on activist, transindigenous, ecofeminist, revolutionary, and therapeutic practices. Mentors are constitutive participants of the planetary transitioning from the patriarchal perception of nature from ‘resource extraction for human society’ to ecofeminist ‘nature as sacred living organism, of which humans are only one part’.

Marina Naprushkina is an artist (born in Minsk, BY). Her work engages with current political and social issues. Naprushkina is mostly working outside of institutional spaces, in cooperation with people, communities and activist organizations. Naprushkina is focusing on creating new formats, structures, and organizations based on self-organization overlap in theory and practice. In 2007 Naprushkina founded the Office for Anti Propaganda. Started as an archive on political propaganda the „Office“ drifted to a political platform. In cooperation with activists and cultural makers, Office for Anti Propaganda lounges and supports political campaigns, social projects, publishes underground newspapers. In 2013, Naprushkina initiated the initiative „Neue Nachbarschaft/Moabit“. Started as a single person initiative, it grew up to one of the largest initiatives in Berlin and built up a strong community of people with and without migrant- and refugee background.

Mayoori is a Mantra expert and energy coach with more than 20 years of practical experience in Sanskrit, Mantras and Spiritual Practices. She left her career in advertising after a successful 14 years of tenure to follow her path in creating this modality which can empower people truly inside and out. She is a certified clinical Hypnotherapist who uses scientific modules like NLP with various spiritual practices founded in Dao and Reiki to deliver the unique experience of “mantra healing “. She has amalgamated various Indian Classical Basics, Energy Dance movements of Mandala, Qi Qong practices to tie in the Sound and Light in one practice called “Mantra Dance”. In her education, she holds a Masters in Mass Communication (2004-2006) and Bachelors degree specialized in Sanskrit (2002-2004), Journalism and Women’s Studies.

Vassiliea Stylianidou aka Franck-Lee Alli-Tis studied Literature and Linguistics at the University of Ioannina (GR) and Visual Arts (B.F.A., M.F.A.) at the University of the Arts Berlin. S*he works as a video and installation artist, using in her* works related artistic media such as text, sound/music and performance. Her* work deals with the limits inherent in systems of order and discipline such as architecture, body, power, family, gender and language. *She deals with the question “How can we shed light on and disarm the mechanisms with which language and words rule over vulnerable bodies, vulnerable environments, vulnerable landscapes?” Since 2018 s*he is co-curator of the feminist queer project Aphrodite* in Athens. S*he currently works on a book project about language, sexuality and gender. S*he is co-founder of the collective project WordMord.

Katerina Katsifaraki studied painting at the Athens School of Fine Arts (1993-1998). In 2001 she completed her postgraduate studies (MFA) in Interdisciplinary Arts at the Dutch Art Institute (D.A.I) in the Netherlands, with a scholarship from the State Scholarship Foundation (IKY). Until 2006 she attended modern dance and performance classes with M. Mendez’s team. She has participated in exhibitions, residencies and performances in Greece and abroad. She designed and implemented in situ installations in various venues, such as Museum Benaki/’NEMA’ (2020), the Halandri Settlement, Athens (2019), Rencontres Internationales Al Maken d’Art Actuel, Tunisia (2016), Patmion Cultural Center, Patmos (2018), Libby Sacer Foundation, Athens (2014), El Estudio Ammeba, and many more. Katsifaraki’s art revolves around the concept of perpetual motion. Ephemeral dwelling, roots and uprooting, the ceaseless moving from place to place, taking notice of the ostensibly unimportant and giving prominence to the fleeting are at the epicentre of her work. We often say that life “unravels” before our eyes. That memory is a “thread” with the potential to direct its course. That joy and peace must first “take root” in order to survive. Inherent in Katerina’s work is a deep connection with nature and the cycle of life.